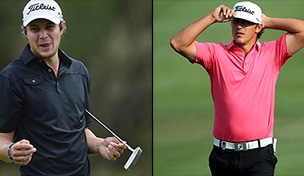 Getty Images
Paige Spiranac of the United States walks to her third shot on the par 4, first hole during the second round of the 2015 Omega Dubai Ladies Masters on the Majlis Course at The Emirates Golf Club on December 10, 2015 in Dubai, United Arab Emirates. (Photo by David Cannon/Getty Images)  -

The other 14 players who received sponsor exemptions: