Kokrak pieces together solid round, cards 65 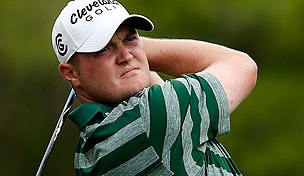 ST. SIMONS ISLAND, Ga. – One of the longest hitters on the PGA Tour, Jason Kokrak put his advantage off the tee to use Friday, carding a 5-under 65 despite windy conditions to move into contention at the McGladrey Classic.

“I played solid. Drove the ball really well today,” explained Kokrak, who sits at 6-under 134 after two rounds. “There’s 36 more holes, so hopefully it blows like this and I can put up two more good solid rounds like that.”

Though he opened his round with a bogey on the 10th hole, Kokrak quickly got things back on track with an eagle at the par-5 15th. From there, the 28-year-old relied on solid ball-striking to complete the lowest round Friday at the Seaside Course.

“I hit iron off a couple tees that I normally wouldn’t today, just to kind of get it in the fairway,” said Kokrak, who reached 11 of 14 fairways and 15 of 18 greens in regulation during his second round. “That’s the name of the game out here. If you can hit it in the fairway, you can really control your ball.”

Kokrak’s round also included a birdie on the par-4 fifth hole, where the Canadian had a memorable moment earlier this week. During the Wednesday pro-am, Kokrak cut the corner of the 409-yard, dogleg right hole and watched his ball roll into the cup for an improbable hole-in-one.

“Today actually I hit it right at the same line,” he added. “I just landed about five, six feet shorter than it did (on Wednesday).”