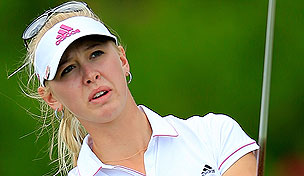 Getty Images
Billy Horschel cover's his face after putting the ninth hole on the north course during the first round of the Farmers Insurance Open at Torrey Pines Golf Course on February 5, 2015 in San Diego, California.  -

Jessica Korda hasn't cooled off since leaving the Bahamas, while Cheyenne Woods is heating up Down Under.

With a 5-under-par 68 Thursday, Korda grabbed a share of the first-round lead with fellow American Katie Burnett in the Volvik RACV Ladies Masters at Royal Pines Resort in Queensland, Australia. Woods, niece to Tiger Woods, is one shot back.

Korda is bidding to open the 2014 season with back-to-back victories. She won the LPGA’s season-opening Pure Silk Bahamas LPGA Classic two weeks ago.

Korda and Burnett, a South Carolina graduate and LPGA second-year pro, lead a jammed leaderboard with 14 players within two shots of the lead. Canada’s Lorie Kane, a four-time LPGA winner, is with Woods among five players a shot back. Sweden’s Caroline Hedwall and American Tiffany Joh are among players three back.

Korda, 20, won in the Bahamas two weeks after deciding to overhaul her swing under Grant Price of the IMG Golf Academy. She went to Price seeking to regain lost club-head speed and fix a too-steep move that was causing injury to her wrist and shoulder.

“It’s going to be a process,” Korda said after her round in Queensland. “I’m finally getting the distance back on my driver, which is nice; I’m taking four practice swings behind the ball. So, I’m still working on things.”

Korda is seeking her second professional title in Australia. She won the LPGA season-opening Women’s Australian Open two years ago, a big deal Down Under given her father, Petr, won the Australian Open in tennis in ’98. This week’s Ladies Masters is a co-sanctioned by the Ladies European Tour and Australian Ladies Professional Golf.

“I feel comfortable here,” Korda said. “I’ve been coming here since I was a baby.”