Kraft Nabisco out as title sponsor of LPGA major 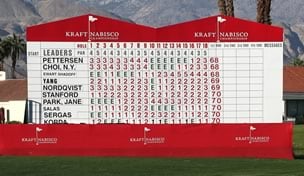 Getty Images
“Probably go break something really quick, have dinner and watch a movie. I’ll be fine. It’s tough. I’m not exactly sure what I’ll do yet." - after finishing bogey, double bogey in Round 3 of the Masters.  -

The search for a new title sponsor for the LPGA’s first major championship of the year is underway.

Kraft Nabisco’s contract with the LPGA expires after next month’s event and the long-time sponsor won’t be renewing. Kraft Nabisco officials informed the LPGA late last year that they would be ending their association with the championship after 33 years. The development comes as no surprise with Kraft changing the nature of its evergreen contract for a five-year deal in 2010, and with no news of an extension apparent since last year's event ended.

Whan told the Desert Sun of Palm Springs in Wednesday's edition that there isn’t likely to be an announcement about the future of the event before Kraft Nabisco hosts it for the last time April 3-6. The LPGA will take over control of the event the day after next month’s championship ends.

“It’s really about what fits best for the client,” Whan told Desert Sun golf writer Larry Bohannan. “I can tell you that when we talk about other tournaments, the questions are always the same. How can we get the best field? How can we get attention for our tournament? No one ever asks that about the Kraft.”

Dinah Shore founded the championship in 1972 with Colgate as the original sponsor. Nabisco came aboard in '82 with the event becoming the Kraft Nabisco Championship in 2002.