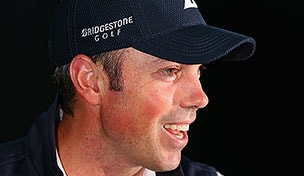 Getty Images
Tiger Wood watches his chip shot on the fifth hole after his second shot went into gallery during the second round of the Northwestern Mutual World Challenge at Sherwood Country Club on December 6, 2013 in Thousand Oaks, California. (Photo by Stephen Dunn/Getty Images)  -

MELBOURNE, Australia – Travelling to Australia is never easy, but for Matt Kuchar his odyssey from Sea Island (Ga.) Resort on Sunday to Royal Melbourne on Tuesday was exceptionally challenging.

Kuchar, who at No. 8 in the World Golf Ranking is the top-ranked American playing in this week’s Australian Masters, putted out on Sunday at the McGladrey Classic, where he tied for seventh, at 4 p.m. and immediately caught a private flight to Atlanta.

After scrambling to catch his connecting flight to Los Angeles, Kuchar had to switch terminals in LAX for his final flight to Melbourne. That’s where things got interesting.

“There were people in the airport with cameras. They were from TMZ. This guy comes up and starts asking me questions,” Kuchar said with a smile. “I’m a golfer, not a celebrity, but figured I’d better just answer them, so I tried to give him the most mundane, unusable answers I could.”

Adding to his travel woes, Kuchar’s flight out of Los Angeles was delayed when a fellow passenger became sick, and he arrived at Royal Melbourne about two hours late.

“Part of the joys of travel,” he said.