Woods not concerned with lack of sleep 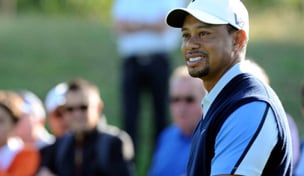 Tiger Woods didn’t get much sleep before Friday’s second round of the Turkish Airlines Open, but it didn’t much matter as he blitzed the Montgomerie Maxx Royal golf course to get into contention to win his sixth title this year.

Despite getting up in the middle of the night to watch his beloved Stanford upset Oregon in a college football game, Woods looked fresh in the second round. He blitzed the course with nine birdies and no bogeys in a round of 9-under-par 63 to get within a shot of the lead.

“Unfortunately, I had to stay longer watching the game than I wanted to,” Woods told media after his round. “Kickoff was 3:30 a.m., but that was no problem as my body is still on Singapore time, but it was one of those games where it looked like we were going up 29-7 but the next thing you know, Oregon comes back at us, and I'm thinking `I have to go warm up for this tournament.’ So I'm saying, `Come on guys, can't you just run the clock out,' and they finally did.”

Woods is expecting a weekend shootout.

“I played a lot better and made some putts,” Woods said. “I missed some too, so it was a round that could have been really special but I'm right there.

“We're going to have to continue going low here given the way the course is set up. The greens are slow, the greens are soft and I expect guys to make a lot of birdies - it's so bunched up there. I've just got to go get it.”

Woods jumped from a tie for 52nd with his birdie blitz Friday.