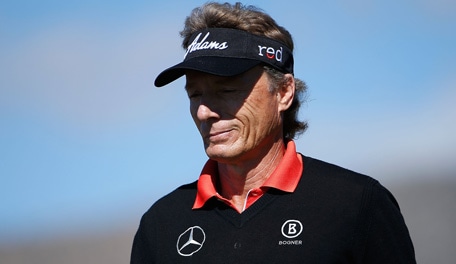 Following a season that included two wins and the season-long Charles Schwab Cup title, Bernhard Langer has been named the Champions Tour Player of the Year for a record fifth time.

Langer captured the Constellation Senior Players' Championship as well as the San Antonio Championship, and he won the season-long race despite a playoff loss to Billy Andrade at the Charles Schwab Cup Championship. His Schwab Cup title was the third of his career, following wins in both 2010 and 2014.

Langer, 58, earned the Jack Nicklaus Award as Player of the Year in a vote over fellow nominees Andrade, Jeff Maggert, Colin Montgomerie and Marco Dawson. He also earned the award in 2008, 2009, 2010 and 2014.

"I'm thrilled to be voted by my peers as the Player of the Year," Langer said in a statement. "The Jack Nicklaus Award is a very meaningful achievement in my career, and to have now won it five times is certainly pretty special. There are so many great players on the Champions Tour and it has become so competitive. This honor is something I don’t take for granted.”

In addition to Langer's awards, Jerry Smith was named Champions Tour Rookie of the Year. In his first fully-exempt season on the over-50 circuit, Smith compiled three top-10 finishes including a three-shot win at the Encompass Championship in July.