The last week 'has been big' for Rose 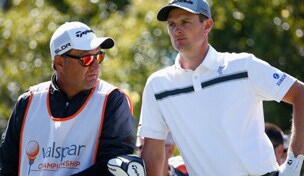 PALM HARBOR, Fla. – This, admittedly, was an important week for Justin Rose.

The reigning U.S. Open champion has played only three tournaments this year after dealing with tendinitis in his shoulder. His results haven’t been what we’ve come to expect from the world No. 7 – no finishes inside the top 15 – and this week’s Valspar Championship is his second-to-last start before the Masters.

In other words, he needed to see signs that his game was coming around – soon.

So far, so good, then, at Innisbrook, where the Englishman chipped in on his final hole for a 3-under 68 Friday and a share of the early halfway lead.

“A couple weeks ago I didn’t really know where I was at with my game, I wasn’t feeling that comfortable,” he said. “The last week or so has been big for me.”

Rose said that in the future he needs to rethink his layoffs, scheduled and otherwise. “Seven, eight, nine weeks might be a little too long to come out and expect to be competitive right away,” he said.

He doesn’t need a set number of tournaments under his belt before he feels major-ready. Most important, he said, was that he’s “100 percent ready, mentally,” and that can only come from gaining confidence with each and every start.

Rose was pleased with his comeback a week ago at Doral, where he was 9-over par at one point before returning to even par. He eventually finished in a tie for 34th.

Like last week’s penal test, Innisbrook is a course where “if you’re off, you’re going to struggle,” and Rose has hit at least 13 greens each of the first two rounds to sit at 3-under 139.