With his big lead gone, Ben Martin played his last four holes in 4 under par – including a big-breaking, 46-foot eagle on 16 – to secure his first PGA Tour victory Sunday at the Shriners Hospitals for Children Open. Here's the skinny on the final round at TPC Summerlin:

What it means: It’s the first PGA Tour title for Martin, who squandered a good opportunity last season at the Zurich Classic. The new wraparound season has proved a launching pad for some of the Tour’s up-and-coming stars, after Sang-Moon Bae won the opener in California and now Martin, 27, moves into the winner’s circle for the first time. It was quite a turnaround for Martin, who shot 78-79 in the season-opening Frys.com last week. With the victory, Martin also secured a spot in the 2015 Masters, his second trip to Augusta (MC as an amateur in 2010).

Round of the day: Up by two at the start of the day, Martin pushed his lead to four shots after an early birdie, then played his next 12 holes in 2 over par. With some of his pursuers going low, Martin lost the outright lead, then gained it back with a two-putt birdie on the drivable 15th, the long eagle on 16 and a closing birdie that moved him from one back to two shots clear.

Best of the rest: Authoring another final-day rally, Kevin Streelman made five birdies in a six-hole span on the back nine to give himself a chance for his second win in the past five months. But unlike at the Travelers, where he birdied the last seven holes on his way to the win, Streelman couldn’t convert a 10-footer on the last that could have made the final half hour even more intriguing. Instead, he settled for a back-nine 31, a 63-65 weekend and a runner-up finish in the Tour’s second event of the season.

Biggest disappointment: The 2014-15 season has lacked a bit of sizzle so far. Webb Simpson, Brooks Koepka and Jimmy Walker gave it a run Sunday at the Shriners, but ultimately they could get no closer than a T-4 finish. A similar scenario played out last week, when the largely unheralded Bae won the title with Hunter Mahan and Hideki Matsuyama (both T-3) among those in pursuit.

Shot of the day: Needing to make something happen to catch Streelman, Martin hit a long iron from 212 yards to 46 feet on 16, then sank the long eagle putt to jump back into the lead.

Quote of the day: “It was just an awesome way to finish,” Martin said. “I didn’t really feel like I had much going all day, but to finish 4 under in the last four to cap my first win was just awesome.” 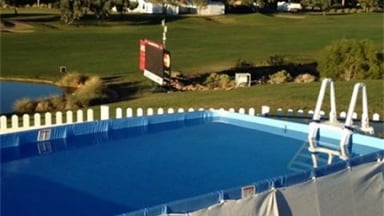 Pool up a seat: Vegas party at Shriners

This week at the Shriners Hospitals for Children Open, you can watch the action from the comfort of one of two pools between Nos. 17 and 18.