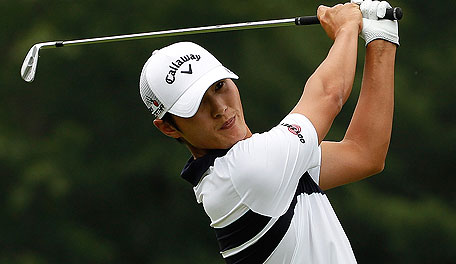 WHITE SULPHUR SPRINGS, W. Va. – Having endured several valleys, Danny Lee ascended all the way to the top at The Greenbrier Classic.

The 24-year-old Kiwi was the last man standing after a frenetic finish at the Old White TPC, defeating David Hearn, Kevin Kisner and Robert Streb in a four-man playoff to earn his first PGA Tour victory.

Lee broke onto the national scene in 2008, when he became the then-youngest winner of the U.S. Amateur at age 18. He turned pro following the 2009 Masters, but he struggled to find his footing on the professional scene while going through a number of swing changes.

“I wanted to swing like Tiger Woods or Justin Rose, that kind of swing,” Lee said. “I’ve probably gone through 100 coaches.”

Lee bottomed out in 2012, missing 13 of 26 cuts and losing both his PGA Tour card and his overall sense of direction.

“I just played horrible that year,” he recalled. “I didn’t know how to hit a golf ball because there were so many things, so many thoughts and things in my head, and I was putting it poorly, as well. I was going through a rough time, but my parents were supporting me really hard.”

Lee made his way back through the Web.com Tour the following year, and returned to full-time status on the PGA Tour last season. He has been golf’s marathon man this season, making his 27th start this week and playing in nearly every event for which he was eligible.

Lee is from New Zealand but of Korean descent, and he explained that his ironman strategy was born in part from a goal to make the International squad for this year’s Presidents Cup, which will be staged in South Korea.

While the results began to pile up, it wasn’t until Lee began working with coach Drew Steckel in March that he really saw a change in his game.

“Meeting my new coach, it was a big life-changer, I should say,” he said. “My swing got so much better. I never really was happy with my golf swing when I was young.”

Lee has rattled off five top-25 finishes since their union, and he opened this week with a 7-under 63. He was one of eight players separated by a single shot at the top of the standings entering the final round and made four birdies against one bogey during a closing 67. That included a 7-foot birdie on No. 17, one that eventually got him into the playoff.

He appeared poised for victory after rolling in a birdie on the first extra hole, but Hearn answered with a birdie of his own to extend overtime. When Hearn’s tee shot found trouble left of the par-5 17th, Lee was able to two-putt for par and the victory. 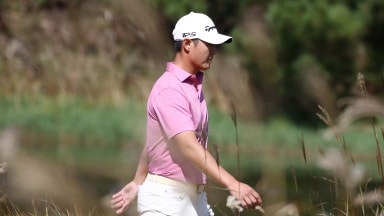