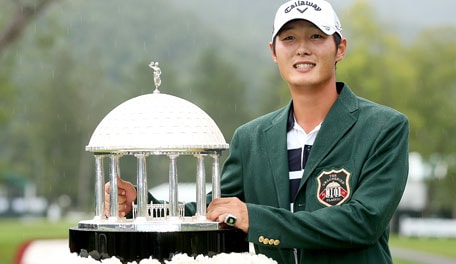 Danny Lee jumped 80 spots in the Official World Golf Ranking, thanks to his victory at The Greenbrier Classic.

Lee went from 158th to 78th following his maiden PGA Tour win. Bernd Wiesberger, who won the Alstom Open de France on the European Tour, moved from 38th to 23rd in the latest edition.

It’s a career-best ranking for both players.

There was a four-way playoff at The Greenbrier. The three co-runners-up also made positive moves up the OWGR. Kevin Kisner, who recorded his third playoff loss of the Tour season, went to from 46th to 36th; Robert Streb from 76th to 60th; and David Hearn 177th to 127th.

Despite his tie for 32nd in West Virginia, Tiger Woods dropped six more spots, to 226th.