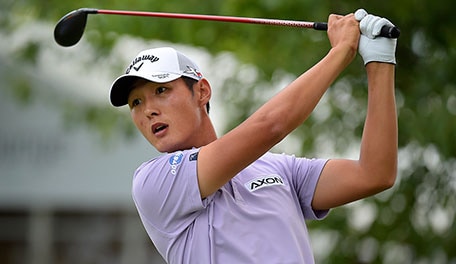 Thanks to a 5-under 65 on Thursday, Danny Lee leads the way at the WGC-Bridgestone Invitational. Here’s where things stand through 18 holes in Akron.

What it means: Lee, who won the U.S. Amateur in 2008, broke through for his first PGA Tour victory in a playoff at the Greenbrier Classic last month. In three events since, he finished one shot out of a playoff at the John Deere Classic, missed the cut at the Open Championship, and tied for fourth at the Quicken Loans National. He's a combined 53 under par in his last 19 rounds. This is his first appearance in a WGC event since 2009, when he played the Bridgestone and the HSBC following a win as an amateur at the European Tour’s Johnnie Walker Classic. He's being closely followed by three of the top eight players in the world in Fowler, Furyk and Rose.

Round of the day: Lee made seven birdies against two bogeys and played a spotless second nine that featured circles on Nos. 1, 2 and 4. He hit 9 of 14 fairways, 11 of 18 greens and needed only 25 putts.

Best of the rest: Furyk and McDowell turned in a pair of 4-under 66s, with Furyk co-leading at 5 under before hitting a tree with his approach at the final hole and closing with bogey.

Biggest disappointment: Without a cut coming to bail him out, Phil Mickelson is going to have to trudge his way through three more rounds after an opening 76; he’ll have two extra competitive rounds to get ready for Whistling Straits. Separately, fresh off his maiden PGA Tour win last week, Troy Merritt is in dead last after Day 1 thanks to a 12-over 82.

Shot of the day: Hideki Matsuyama’s chip-in for birdie at the par-4 14th. Matsuyama was as low as 3 under before making double bogey on the 18th.

Quote of the day: "Back then I was happy with shooting in the high 70s."- Lee on his first appearance at the WGC-Bridgestone in 2009.

Storyline to watch going into Friday: Jordan Spieth turned in a two-birdie, two-bogey, even-par 70. The out-for-revenge, two-time major winner will look to get back into the hunt when he starts Round 2 five shots back.