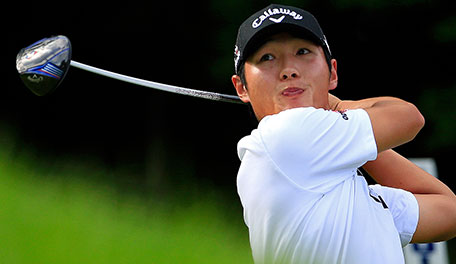 SILVIS, Ill. – If not for Jordan Spieth, Danny Lee would be the story of the week.

The 2008 U.S. Amateur champion finally broke through for his first PGA Tour victory last week at the Greenbrier, and seven days later posted a bogey-free 9-under 62 Saturday to enter the final round of the John Deere Classic just one shot off the lead.

“I’m just letting myself go because I’m playing so great right now,” Lee said. “And probably my confidence level is up more than 150 percent. And at the moment, I feel like I can accomplish anything right now.”

That’s good news, because if Lee is going to go from winless to taking two Tour titles in two weeks, he’s going to have to outduel the hottest golfer on the planet, the guy who made Lee’s 62 on Saturday an afterthought with a 61 of his own.

Lee, who played with Spieth and Brian Harman in Rounds 1 and 2, will go off with Spieth once again Sunday, this time in the final group.

“What I know is, there’s going to be a lot of people watching tomorrow. And, hopefully, many people will pull for me, not Jordan – just to make it fair,” he said, laughing. “You know, I think it’s going to be a fun day. I cannot wait. Let’s see what happens tomorrow.