Lewis 'excited for challenge' at British with found clubs 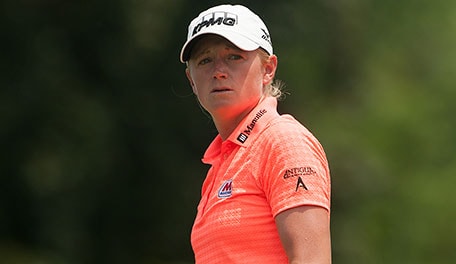 TURNBERRY, Scotland – Stacy Lewis put herself in a strong frame of mind watching the British Open at St. Andrews on television two weeks ago.

Watching Zach Johnson navigate the Road Hole and around all those pot bunkers brought back special memories of Lewis’ victory there two years ago. Lewis birdied the 17th Road Hole and the 18th in impressive fashion to close out her victory.

Even a troubling arrival at Turnberry, where it took some adventure to find her golf clubs after they were temporarily lost at London’s Heathrow Airport, couldn’t dull Lewis’ enthusiasm for her return to links golf.

Lewis will be looking to break through after a year of almosts. While Lewis hasn’t won in a little more than a year, she has consistently given herself chances with strong play. She has recorded six second-place finishes and three third-place finishes since winning the Walmart NW Arkansas Championship in June of last year.

“I definitely feel like I’m due,” Lewis said. “I feel like I’m playing better golf now than I was at the beginning of the year, even when I was having some pretty good results.”

Lewis lost the first major of the year, the ANA Inspiration, in a playoff with Brittany Lincicome. She played in the final pairing Sunday at the U.S. Women’s Open three weeks ago but was derailed by a pair of double bogeys and tied for third.

“I like where things are at,” Lewis said. “It’s definitely frustrating I haven’t won this year, but I think it’s coming.”

When Lewis arrived in Scotland, her golf clubs did not arrive with her. She showed just how tenacious she can be finding those clubs. Her caddie, Travis Wilson, learned that Ai Miyazato’s caddie, Mick Seaborn, was a schoolboy chum with the head of baggage for British Airways at Terminal 5. They enlisted the friend’s help, who found Lewis’ bag among hundreds of bags stacked up in baggage claim and got them on a flight from London to Glasgow. Still faced with the problem of retrieving them from Glasgow, Lewis hopped in a car with Wilson driving her to the airport, but the adventure took another turn when they got flat tire on the way.

“I did tell him, `There’s not anybody else I would rather be stuck on the side of the road with a flat tire,’” Lewis said. “He’s pretty handy and can fix anything. I put my two cents in here and there, but he was the one that got dirty and mud all over, and grease all over his hands. I held a flashlight and took some bolts off and things like that.”

Lewis eventually retrieved her clubs in time for Tuesday’s pro-am and Wednesday’s practice round.

“Mentally, just having those clubs, I slept a lot better,” Lewis said.