Lewis' quest to regain No. 1 resumes in Australia 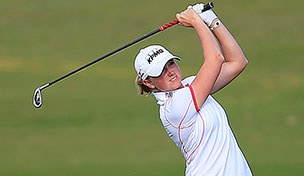 Stacy Lewis wants that Rolex No. 1 ranking back.

Though No. 3 Lewis can’t gain it back with a victory this week at the Women’s Australian Open, she can chip away at No. 1 Inbee Park’s lead with Park not making her 2014 debut until next week’s Honda LPGA Thailand.

In fact, Lewis tees it up this week with the player standing between her and Park, No. 2 Suzann Pettersen. They make for a compelling grouping along with Hall of Famer Karrie Webb in the first two rounds in Australia. They’re scheduled to go off together Thursday at 8:05 a.m. local time – that’s 4:05 p.m. Eastern Time on Wednesday – at Victoria Golf Club.

Pettersen, by the way, is within reach of taking the No. 1 ranking this week.

Lewis took the No. 1 ranking from Yani Tseng in March of last year and held it for four weeks before Park seized it.

“I really want to get back there, so I can actually enjoy it a little bit more now,” Lewis said in her pre-tournament news conference Wednesday in Victoria.  “I know what to expect. I know kind of what goes along with being No. 1. I certainly don't feel like I lost it. Last year was probably one of the most consistent years I've ever had. So, I don't feel like I'm doing anything wrong. I've just got to keep chipping away at Inbee and Suzann, and I'll get there.”

After Park won her third consecutive major championship at the U.S. Women’s Open last year, it lit a fire in Lewis and Pettersen, who both went on tears.

Lewis has made 12 worldwide starts since the U.S. Women’s Open and finished in the top 10 every time. She has won or finished second in half of those starts. She won the major championship right after the U.S. Women’s Open, claiming the Women’s British Open, and has five second-place finishes, including her last two starts.

Pettersen won 2013’s final major, claiming the Evian Championship. Since Park’s historic win at the U.S. Women’s Open, Pettersen has made 10 starts, finishing top 10 in nine of them, winning three of them. That run of victories has put her on the brink of becoming No. 1 for the first time in her career.

“I just want to see how good I can be,” Pettersen said. “I don't want to leave this game knowing I could have done more, or I've left it out there.”

While Pettersen can get to No. 1 this week, Lewis sees an opportunity over the three events on this South Pacific/Asian swing.

This Women’s Australian Open is the second LPGA event of the year. It’s co-sanctioned by the Ladies European Tour. Rolex No. 4 Lydia Ko, No. 9 Lexi Thompson, No. 11 Catriona Matthew and No. 13 Paula Creamer are also in the field. So is Cheyenne Woods, winner of last week’s Australian Ladies Masters. Ariya Jutanugarn, 18, an emerging force until she injured her shoulder at the Wegmans LPGA Championship last June, is making her first start since the injury. She’s an LET member.