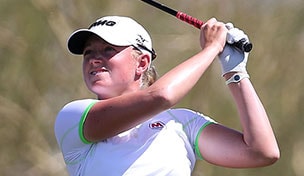 Getty Images
“The most important thing is learning from all those things. I’m making sure that all those experiences make you stronger, a better person and things like that. I think that I’ve learned from those things and I just need to keep getting better at it, and hopefully keep making people happy.” – Sergio Garcia, on what he has learned from the experience after making a racial joke at the expense of Tiger Woods.
-

Stacy Lewis won’t have Inbee Park and Suzann Pettersen pushing her in the field when the Mizuno Classic begins Friday in Japan, but their presence lurks anyway.

At No. 3, Lewis is the highest ranked player in the Rolex world rankings playing the LPGA this week. She’s also the defending champion. She will be looking to keep pace with No. 1 Park and No. 2 Pettersen in the trio’s domination of the 2013 season.

“We’ve made each other work hard,” Lewis said Thursday in her pre-tournament news conference at Kintetsu Kashikojima Country Club. “I think the three of us combined, we’ve won over half the tournaments on the Tour. The three of us have definitely made each other better, I can tell you that. I’m sure it will continue into next year as well. What Inbee did in the middle of the year was just unbelievable. I think it really opened mine and Suzann’s eyes that, wow, this is really possible.”Lewis is going for her fourth LPGA title this year, which would equal her win total from last year, when she became the first American in 18 years to win the Rolex Player of the Year title.

The Rolex Player of the Year award isn’t based on a vote like the PGA Tour. It’s based on a points system.

Park leads the POY points race this season with 290. Mathematically, Lewis has a chance to equal Park’s total, but it’s a long-shot chance. Lewis would have to win all three of the remaining events on the LPGA schedule and hope Park doesn’t pick up a single point the rest of the way. Suzann Pettersen is more realistically in the running for Player of the Year. Pettersen has 252 points and Lewis 200 points. A win is worth 30 points with only top-10 finishes awarded points. Pettersen would have to win one of the final two events she is playing and at least tie for third in the other to have a chance.

Park (6), Pettersen (4) and Lewis (3) have combined to win more than half of the PGA Tour events staged this year (13/25). They’ve claimed all the majors with Park taking three and Lewis and Pettersen one each.

Lewis tees it up in Japan looking to improve on her 16 top-10 finishes in 23 starts this season. That consistency has helped her lead the LPGA in scoring (69.537) in her bid to become the first American in 19 years to win the Vare Trophy for low scoring average.

“I definitely didn’t expect these last two years,” Lewis said. “I kind of knew it was coming, but the number of top-10s I’ve had, and to be in contention, and getting wins, I mean, that’s ultimately what I want to do. And that’s what I’ve been able to do.

“I think that this year has almost been better than last year. I mean, that’s kind of crazy that I could have even topped it. But that’s the goal. Just trying to keep getting better and better.”