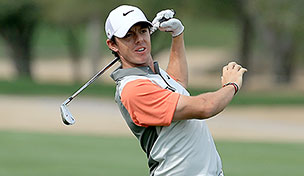 DUBAI, United Arab Emirates – When Rory McIlroy made the turn on Sunday he was tied for the lead at 13 under par. Not bad for a guy who went out in 1-over 36 and began the day two strokes out of the top spot.

As a slow drizzle descended on the Emirates Golf Club, however, the Ulsterman’s chances faded.

Bogeys at Nos. 10, 12 and 13 cost the world No. 6 his first title of 2014, and his second Dubai crown, but compared to last year’s trip through the Middle East, McIlroy's tie for ninth was a marked improvement.

“I think anything that sort of could go wrong did,” said McIlroy, who closed with a 74 to finish at 12 under, four shots behind winner Stephen Gallacher. “I hit a couple of loose drives, but I didn't really get away with them.”

McIlroy missed the cut in his 2013 opener down the road in Abu Dhabi the same week he was introduced as a Nike Golf staff player. Things didn’t get much better from there.

But to begin this season McIlroy has already played four times as many rounds following his runner-up finish in Abu Dhabi two weeks ago, and has now finished in the top 10 in six of his last eight events.

McIlroy did confirm before leaving the Emirates course that he plans to play this month’s WGC-Accenture Match Play Championship, the Honda Classic and WGC-Cadillac Championship.