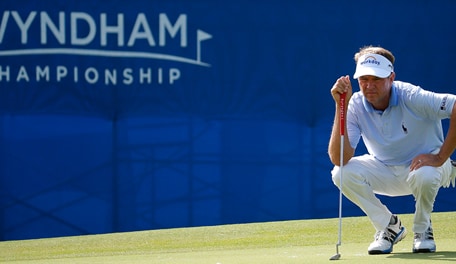 GREENSBORO, N.C. – A putting reminder from longtime swing coach Jack Lumpkin, and a swing tip from his brother, Mark, added up to Davis Love III’s best start this season.

The 51-year-old followed an opening 64 with a 4-under 66 on Friday to take the early lead at the Wyndham Championship, an event he’s won twice.

Love, who was sidelined for nearly three months midway through this season following foot surgery, played his first eight holes (he started on No. 10) in 4 under par, but he said it was his last 10 holes that gave him the most encouragement.

“It will look boring, 10 pars, but I made some nice putts for par and some good up-and-downs to keep the round together,” said Love, whose best finish this season is a tie for eighth at the CIMB Classic last November.

In addition to his ailing right foot, Love has also been somewhat distracted this season by his duties as an assistant Presidents Cup captain and the captain of next year’s U.S. Ryder Cup team.

Love would become the third-oldest winner on the PGA Tour with a victory this week and could create an interesting scenario for Jay Haas, the U.S. Presidents Cup captain who will need to make his picks for this year’s team in two weeks.

When asked what he would tell Haas if he won this week Love smiled, “I’d tell him I’m going to The Barclays [next week’s playoff event] and keep an eye on me [as a potential captain’s pick].”