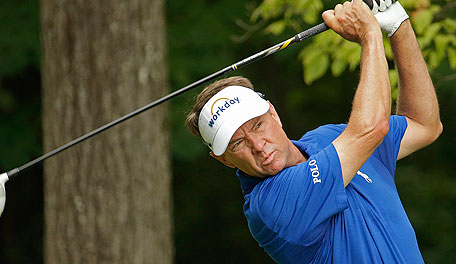 GREENSBORO, N.C. – Davis Love III's dramatic win Sunday at the Wyndham Championship not only earned him his 21st PGA Tour title, it also qualified him for the FedEx Cup Playoffs.

Love and Gore made the biggest moves up the points list. Love started the week No. 186 and is now No. 76 after his first win since the 2008 Children's Miracle Network Classic at Disney.

The 51-year-old U.S. Ryder Cup captain had committed to play next week's Champions Tour event, but, well, things have changed.

"I feel sorry for my friends at the Dick's [Sporting Goods Open] because they were asking me to play," Love said.

For the second straight year, Villegas used a good finish at the Wyndham to make the playoffs. Last year he won at Sedgefield C.C., and this year he squeaked in at No. 123 with a 67-68 weekend.

Blixt started the day tied for the lead and only managed an even-par 70, but it was good enough to move up from No. 135 to 121.

"It's a big heavy burden taken off my shoulders right now," he said. "It's been a rough year, been a long year. Lot of searching, and I feel like I'm doing the right things again, and the ball is going where I want it to go and really excited about it."