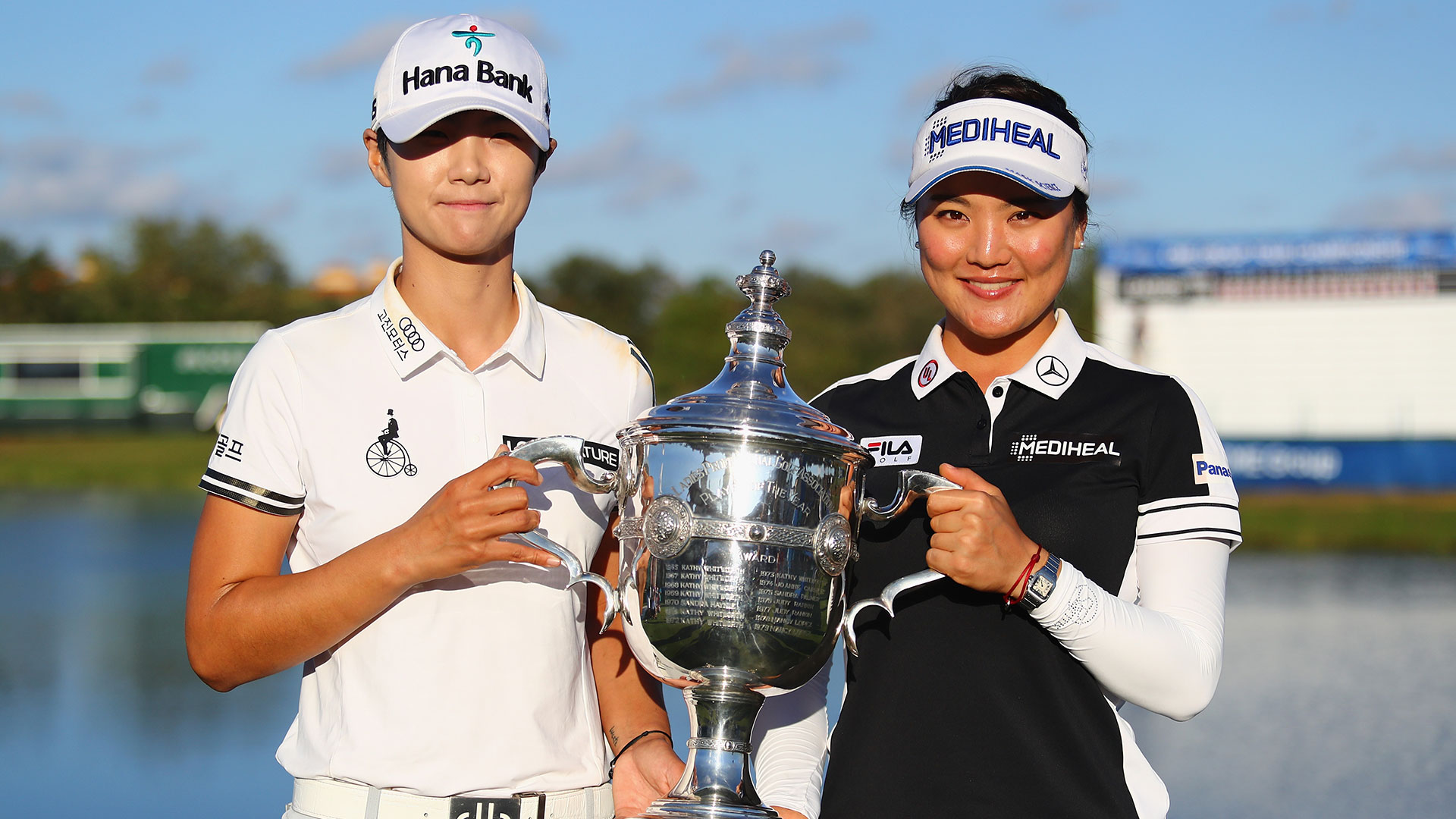 NAPLES, Fla. – In the end, the CME Group Tour Championship played out a lot like the entire 2017 season did.

Park shared the Rolex Player of the Year Award with So Yeon Ryu. By doing so, Park joined Nancy Lopez as the only players in LPGA history to win the Player of the Year and Rookie of the Year titles in the same season. Lopez did it in 1978. Park also won the LPGA money-winning title.

Here’s a summary of the big prizes:

Rolex Player of the Year
Ryu and Park both ended up with 162 points in the points-based competition. Park started the week five points behind Ryu but made the up the difference with the five points she won for tying for sixth.

It marks the first time the award has been shared since its inception in 1966.

Ryu and Park join Inbee Park as the only South Koreans to win the award. Park won it in 2013.

Vare Trophy
Thompson won the award with a scoring average of 69.114. Sung Hyun Park finished second at 69.247. Park needed to finish at least nine shots ahead of Thompson at the CME Group Tour Championship to win the trophy.

There were a record 12 players with scoring averages under 70.0 this year, besting the previous record of five, set last year.

CME Globe $1 million prize
Thompson entered the week first in the CME points reset, but it played out as a two-woman race on the final day. Park needed to finish ahead of Thompson in the CME Group Tour Championship to overtake her for the big money haul. Thompson tied for second in the tournament while Park tied for sixth.

By winning the CME Group Tour Championship, Jutanugarn had a shot at the $1 million, but she needed Park to finish the tournament eighth or worse and Thompson to finish ninth or worse.

The tour saw a tour-record 17 players win $1 million or more this season, two more than did so last year.

Ryu came into the week as the only player who could pass Park for the title, but Ryu needed to win to do so.

Rolex world No. 1 ranking
The top ranking was up for grabs at CME, with No. 1 Feng, No. 2 Sung Hyun Park and No. 3 So Yeon Ryu all within three hundredths of a ranking point. Even No. 4 Lexi Thompson had a chance to grab the top spot if she won, but in the end nobody could overtake Feng. Her reign will extend to a second straight week.

Rolex Rookie of the Year
Park ran away with the award with her U.S. Women’s Open and Canadian Pacific Women’s Open victories among her 11 top-10 finishes. She had the award locked up long before she arrived for the season-ending CME Group Tour Championship.