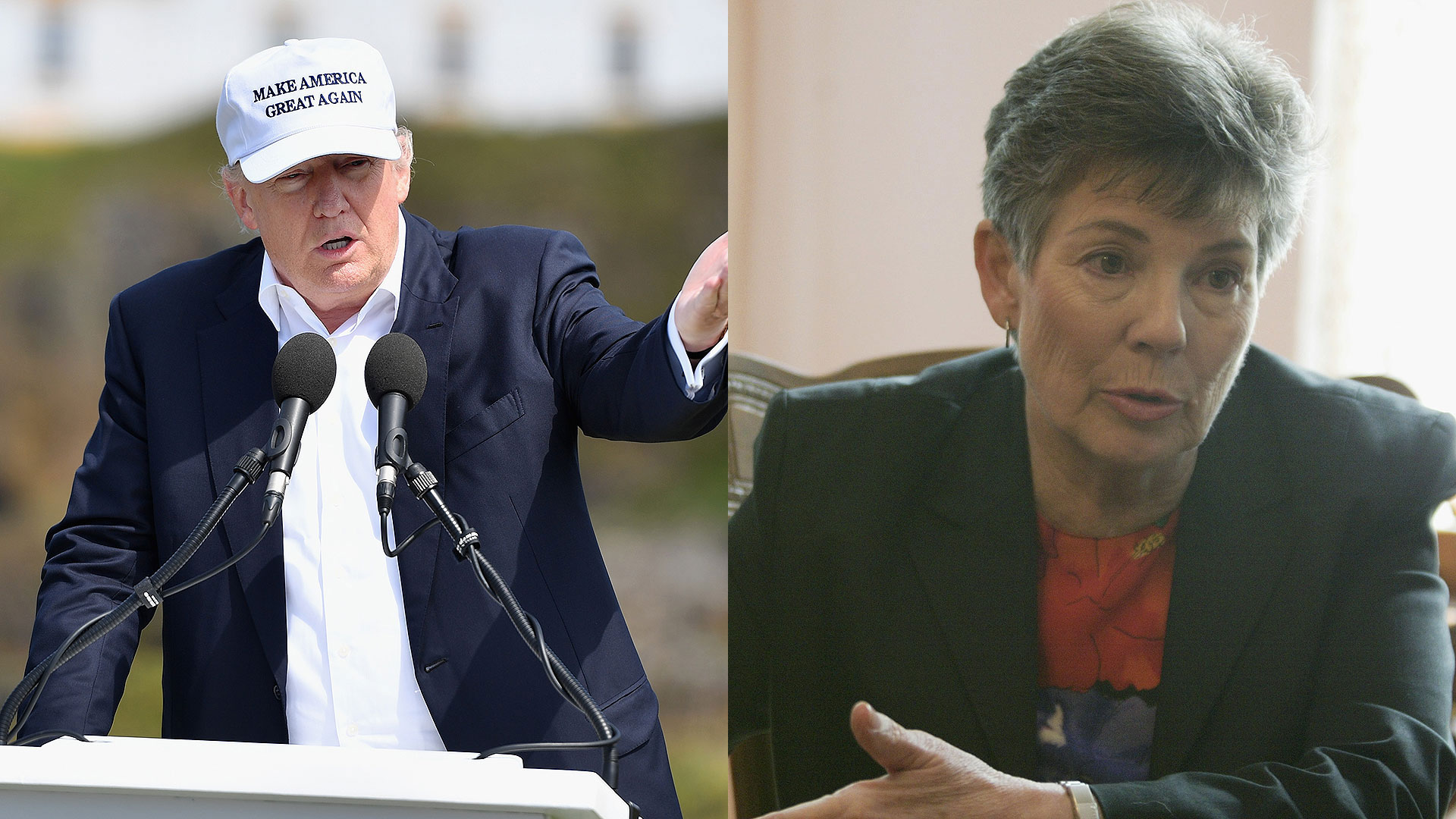 SAN MARTIN, Calif. – Martha Burk may have trouble enlisting LPGA players to support a movement to “force the USGA to abandon” plans to play the U.S. Women’s Open at Trump National in Bedminster, N.J., next year based on a small sampling of reactions Saturday at CordeValle.

Burk, the director of the National Council of Women’s corporate accountability project, is backing “heavy-duty protesters” upset that the U.S. Women’s Open will be played on a Trump property.

She explained in a blog in the Huffington Post Friday that she supports Dr. Jeffrey T. Sammons and other African American golfers who have been trying to get the USGA to disassociate from Trump properties. She wrote the movement is “an objection” to “Trump’s overtly racist and sexist views.”

LPGA pros who were not aware of the protest were informed of the issue in an unusual manner Saturday with a plane over CordeValle Golf Club carrying a banner that read: “Golf Say No to Trump. #TrumpHazard.”

Stacy Lewis could hear the plane sputtering overhead when she was playing the highest point of the course.

“It was kind of annoying,” Lewis said. “We were up in the mountains, and it was kind of close, so you could hear it, and I was like, `Is that thing going to run out of gas?”

After the round, Lewis was asked if she was bothered that the U.S. Women’s Open was scheduled to be played at a Trump property.

“There’s not a whole lot I can do about it,” Lewis said. “As players, what are we going to do, just not show up and not play the U.S. Women’s Open? I don’t think people are going to do that. You just have to rely on the governing bodies. I’m sure they will be prepared for everything that week. We have to rely on them.”

Karrie Webb said it felt like LPGA pros were being thrust into politics amid a presidential election.

“The essence of the Olympics is there is no political agenda, and that’s what sports should be, in general,” Webb said.

In her blog, Burk wrote that the LPGA has been “silent as usual even though the Donald has disparaged women regularly, calling them bimbos, dogs, fat pigs and crazy. Nothing new here – the good girls of golf have always been afraid to cross the guys.”

Cristie Kerr took issue with the depiction, saying Trump has been especially supportive of women’s golf. Kerr has strong ties to Trump and has called herself “good friends” with him. She once appeared on his reality show “The Apprentice” and has honorary memberships to his golf clubs.

“I think it’s a little unfair she is trying to press an organization to side with her personal opinion,” Kerr said. “He could be the next president of the United States. I’m a woman. I’m all for women’s empowerment and everything. Donald’s done tons for the women’s game. I just think it’s unfair she’s pressing our organization to jump on the bandwagon when not all of us feel the way she does.”

The USGA released a statement Friday saying that while some of Trump’s remarks are “at odds with our belief that golf should be welcoming and inclusive,” the governing body has found Trump National “fully compliant” with the USGA’s anti-discriminatory policies.

Gerina Piller said she was wary of the politics involved and is trusting the USGA’s venue selection process.

“I don’t really see getting into politics,” Piller said. “It’s just one of those things where if it’s a good course and they see it fit to host an event there, I think that it’s OK.”

“The USGA has been and continues to be a great partner for the LPGA. The USGA – not the LPGA – owns and operates the U.S. Women's Open and we are delighted to have so many of our LPGA members qualify to participate each year.

“When it comes to decisions regarding venue, purse, TV, etc., those are solely made by the USGA.

“We fully expect to keep the U.S. Women's Open on our 2017 schedule, and support the decisions made by the USGA on this matter.”