Luke plays 'kind of a Luke Donald round' on Day 3 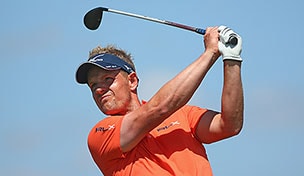 Getty Images
Rory McIlroy of Northern Ireland walks to the 15th tee during the second round of the Arnold Palmer Invitational presented by MasterCard at Bay Hill Club and Lodge on March 18, 2016 in Orlando, Florida. (Photo by Chris Condon/PGA TOUR)  -

PALM HARBOR, Fla. – Luke Donald said he played “kind of a Luke Donald round” on Saturday at Innisbrook.

“That’s kind of what you need around this place,” said Donald, the 2012 winner here, after a bogey-free 67 moved him inside the top 10 at the Valspar Championship.

A week after finishing fourth in greens hit at Doral, Donald fell into a few sloppy habits and struggled with his ball-striking the first twodays on the Copperhead Course. He watched videos of his swing and seemed to figure it out on the range after Friday’s round, quieting his lower body and eliminating the two-way miss.

In the third round he hit 14 greens, a marked improvement from just nine greens hit each of the first two rounds.

“I never thought I was very far off,” he said, “but around a course like this you need to hit fairways and greens and kind of make it easier onyourself because it’s tricky.”

Donald sits at 3-under 210, well behind leader Robert Garrigus, but he appears in good position to extend his streak of three consecutive top-6 finishes here.