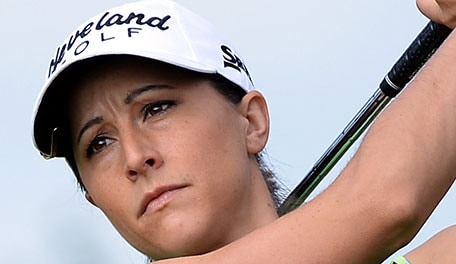 Though Mackenzie isn’t giving up her TV duties, which include being a Morning Drive host, she’s beginning her comeback as a tour pro after missing 18 months due to a back injury. Mackenzie, 32, hasn’t played an LPGA event since the Evian Championship in September of 2013.

She underwent microdiscectomy surgery in February of 2014 to repair a herniated disc in her lower back.

“I’m playing right now because I love the game,” Mackenzie said. “Because I do have options, I certainly don’t necessarily need to be playing, but I love competing and I love being on tour.”

Mackenzie is playing on a major medical extension based on her 2013 LPGA status. She underwent surgery to repair a herniation between the L4 and L5 discs in her back. She also had stem cells harvested from her hip and injected into her troubled discs to help repair the herniation. The recovery took a lot longer than Mackenzie expected with setbacks requiring unique therapies. She has been troubled with back problems since playing at the University of Washington.

Mackenzie isn’t sure what to expect this week.

“My goal is to have fun and enjoy it,” Mackenzie said. “That’s why I’m here.

“I have very low expectations, not in a bad way. I don’t have a lot to draw from. I’ve been out of competition for so long; I don’t have great memories over the last 18 months, as it relates to golf. I obviously want to play well. I wouldn’t ever put myself in position to fail. I feel like I still have the ability to go out and compete at a high level, but I’m fortunate just to have the opportunity to come back.”

Mackenzie said while she enjoys her TV work, she misses being a tour pro.

“When there are certain tournaments on, and golf courses I like, and places I enjoy going to, it’s hard to not be there,” Mackenzie said.

So she’s relishing being at Las Colinas Country Club in Irving, Texas, this week, being back between the ropes.

“It feels good to be back,” she said.