Made cut means no Super Bowl for Couples 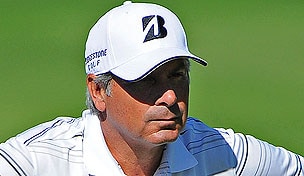 Getty Images
Despite it being a competition the teams show sportsman like conduct and congratulate one another.  -

Usually a late rally to slip past the 36-hole cut serves as a cause for celebration for a golfer. Such was not the case Friday for Fred Couples in Dubai.

The former Masters champ - and a winner of the Omega Dubai Desert Classic in 1995 - carded a 1-under 71 Friday at Emirates GC, and at 3 under will tee it up Saturday eight shots behind overnight leader Rory McIlroy.

The prospect of an early exit from the desert, though, had some appeal for Couples. A Washington state native, the 54-year-old is a diehard Seattle Seahawks fan and even raised the team's "12th Man" flag at a game earlier this season. Couples had tickets to see the Seahawks take on the Denver Broncos in Super Bowl XLVIII Sunday, but now will be playing golf in Dubai this weekend rather than cheering on his team from chilly MetLife Stadium.

Couples' weekend fate was very much in jeopardy down the stretch, as a pair of back-nine bogeys Friday dropped him to 1 under for the week and below the cut line. He rallied with birdies on each of his final two holes, though, to finish one shot clear of the cut that fell at 2-under 142. Following the round, both he and one of his main sponsors knew the implications of his birdie-birdie finish:

From Couples, who birdied last two holes to make cut, wont be able to use Super Bowl tix to see hometown Seahawks: "Please call me stupid."