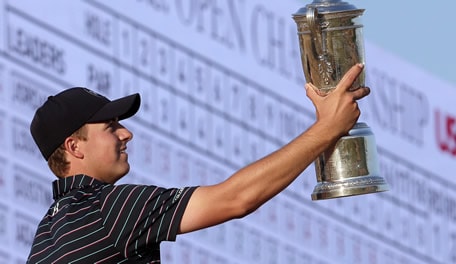 Jordan Spieth got the glory, of course, he isn’t the only one who found success in the first two majors of the year.

Dustin Johnson (T-6 at the Masters, T-2 at the U.S. Open) and Rory McIlroy (4, T-9) joined Spieth as the only players to record top-10 finishes in both Grand Slam events.

Johnson suffered the most gut-wrenching loss at Chambers Bay, where he three-putted from 12 feet on the last to fall one shot shy. McIlroy was an afterthought until a closing 66 helped him back-door a top 10.

Patrick Reed had a top-25 in both, after finishing in share of 22nd at the Masters and following it up with a T-14 at Chambers.

Major season hasn't been as kind to Martin Kaymer, the only top-25 player in the world who has missed the cut in both majors. Bubba Watson (T-38, MC) and Jim Furyk (MC, T-42) – two of the top six players in the world – have yet to record a top-25. Even Jimmy Walker, who has won five times since October 2013, has gotten off to a rough start in the majors. Though he’s made both cuts, he doesn’t have a top-35 finish.