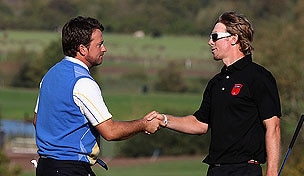 Getty Images
<a href='https://instagram.com/p/9AM3kvNT1x/?taken-by=cheyenne_woods' target='_blank'>@cheyenne_woods</a>: Back on a plane! Next stop: India.  -

MARANA, Ariz. – One scribe with a particularly good sense of humor asked Graeme McDowell if he’d ever played Hunter Mahan, his Round 3 opponent at the WGC-Accenture Match Play Championship, in a match-play event.

“I think we played together in a reasonably high-profile match there a few years ago,” G-Mac deadpanned.

McDowell and Mahan famously went head to head at the 2010 Ryder Cup in Wales, with the Northern Irishman winning, 3 and 1, to secure the clinching point for Europe.

Overcome with emotion, Mahan was unable to answer post-match questions in Wales and many of his teammates, including Stewart Cink, came to his defense.

“There’s a decent chance he might be out for a shade of revenge tomorrow. Who knows, it’s been a long time, a lot of water under the bridge since 2010,” said McDowell, who had to rally for the second consecutive day to win, beating Hideki Matsuyama, 1 up.

Mahan, who finished runner-up at the Match Play last year, beat Richard Sterne on Thursday, 2 up, and didn’t seem that concerned about the sequel to his famous showdown with McDowell.

“Graeme is a great player,” Mahan said. “It’s going to be a battle. I’m excited about the opportunity.”