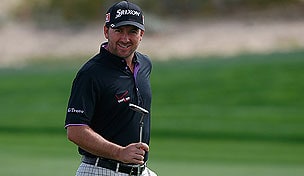 Getty Images
LAS VEGAS, NV - OCTOBER 24: Kevin Na and his caddie Kenny Harms line up a putt on the 15th green during the third round of the Shriners Hospitals For Children Open on October 24, 2015 at TPC Summerlin in Las Vegas, Nevada. (Photo by Scott Halleran/Getty Images)  -

ORLANDO, Fla. – A day after Tiger Woods bowed out of the field at this week’s Arnold Palmer Invitational because of a bad back, questions continued to swirl about what the injury might mean for Woods’ quest for major No. 15.

Graeme McDowell, himself in search of major No. 2, empathizes with Woods’ situation. But he believes the talent level on the PGA Tour is a larger obstacle for Woods than it has been in years past.

“Winning major championships is getting harder and harder for everyone, including the best player maybe that’s ever lived, in Tiger,” McDowell said Wednesday. “He’s got more than just his body to be fighting. There’s a lot of great players in the world now. Everyone is getting better.”

When asked which factor might prove more difficult for Woods to overcome – his fellow professionals or his own injury issues – the Ulsterman sided with the competition.

While McDowell used to be confident that Woods would catch – and surpass – Jack Nicklaus’ total of 18 majors, he now believes that at age 38 “it’s going to be hard” for Woods to win four or more majors. Nevertheless, he’s not ready to count out the man who still tops the world rankings.

“You’d never put anything past him. He could prove us all wrong and show up at Augusta, win by 10 and you guys will be back to the keyboards and waxing lyrical, and away we go again. Who knows?”