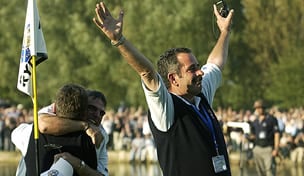 Getty Images
Robert Gamez was a PGA Tour rookie in 1990, but he wasn’t your average rookie. He won in his first career start, taking the Tucson Open. At the Nestle Invitational, as the Bay Hill tournament was then known, he came to the final hole trailing playing partner and co-leader Larry Mize by one shot. Gamez then holed a 176-yard 7-iron for eagle to take the clubhouse lead. Greg Norman was on the 17th tee when he heard the roar. He needed one birdie in his final two holes to tie, but parred both and finished one shot back.  -

Paul McGinley confirmed Thursday that he has named Sam Torrance and Des Smyth as his first two vice captains for the 2014 Ryder Cup at Gleneagles.

McGinley said that he will name two more assistants later in the year, once he sees the direction of his 12-man roster.

McGinley, 47, and Torrance, 60, have tasted victory together before on the Ryder Cup stage. In 2002, Torrance, an eight-time Ryder Cupper, was the captain when McGinley holed a putt on the 18th hole to defeat Jim Furyk and clinch the cup for the Europeans.

McGinley tabbed Smyth, 61, he said, because the fellow Irishman took McGinley “under his wing” during the early stages of his career. Smyth was also a vice captain at the 2006 Ryder Cup.

“They were the first two people I had in mind for this role when I was appointed captain,” McGinley told reporters in a news conference Thursday, “and since then, I have talked to a lot of the experienced European players about having them as part of the team and, to a man, they have been very supportive of the idea.”

Tom Watson has already named Andy North and Raymond Floyd as two of his assistant captains.

Depending on your viewpoint, the American captain and assistants are either more experienced or just plain older than their European counterparts. The average age of the captaincy for the U.S. is 67 years, while Europe’s is 56.3.