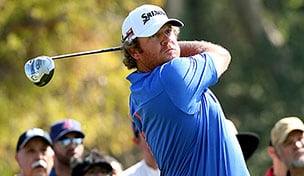 Getty Images
OAKVILLE, ON - JULY 24: Bubba Watson plays his shot from the 18th tee during round two of the RBC Canadian Open on July 24, 2015 at Glen Abbey Golf Club in Oakville, Canada. (Photo by Vaughn Ridley/Getty Images)  -

After a birdie at the first hole Sunday at Riviera, McGirt was off to a solid start in his bid to turn his first 54-hole lead in a PGA Tour event into his first PGA Tour victory.

McGirt, though, wouldn’t make another birdie the rest of the day at the Northern Trust Open. His two-shot lead was gone before he reached the sixth tee.

With a 2-over-par 73, McGirt tied for a sixth, a good week but not the finish he hoped. His finish assures him he will get into the Honda Classic, if he wants.

“I want to win so bad, sometimes I can’t sleep thinking about it.”

It was the sixth top-10 finish of McGirt’s career, another step McGirt hopes will lead to that first win.

“I’m taking positives away from this,” McGirt said. “For me to finish tied for sixth on this golf course, I played pretty darn well. I would have liked to have played better today, but I’m pleased overall, looking at the big picture.”