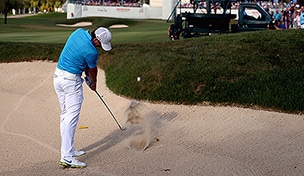 PALM BEACH GARDENS, Fla. – Rory McIlroy stumbled down the stretch at the Honda Classic, and much of his trouble was due to several poor sand shots on the final three holes Sunday at PGA National.

Holding a two-shot lead through 54 holes, the Ulsterman was 2 over on his round but still leading by one when his drive at No. 16 found a bunker left of the fairway.

From there, McIlroy faced an approach to a green guarded by water, and he caught his second shot fat. The ball splashed in the middle of the hazard, leading to a double bogey that dropped him out of the lead for the first time all day.

“Obviously the second shot at 16 killed me,” he said. “I was underneath it and came in a little heavy.”

On the next hole, McIlroy’s tee shot tumbled into a bunker long and left of the green. He splashed out to 10 feet but failed to make the par-saving putt.

McIlroy birdied 18 to tie for the lead, but once again found sand when playing the par 5 minutes later in a four-man playoff. His approach found a bunker behind the green, and when his sand shot rolled past the pin and into light rough, his fate was largely sealed.

“It was impossible to get any spin on it,” McIlroy said. “Played it the best way I could, but the lie was sort of against me on the slope.”