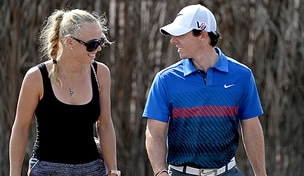 Though he faded somewhat after a hot start, Rory McIlroy sits five shots off the pace after a 1-under 71 to begin the DP World Tour Championship. Thursday's round for the Ulsterman, though, was also notable for who was walking alongside him in Dubai.

McIlroy opened with three birdies across his first five holes, but was unable to birdie any of the final 11 holes on a day when 36 players in the 60-man field shot par or better. After the round, McIlroy was blunt in his assessment of his performance.

While McIlroy toiled at the Jumeirah Golf Estates, girlfriend Caroline Wozniacki made an appearance Thursday in his gallery, potentially putting to rest recent rumors of the couple's split. McIlroy has stated a desire to "keep my private life private," but he did comment on the tennis star joining him Thursday.

"It's good to have her here," he said. "She started her pre-season training a couple of days ago and was on the court at 7 a.m. practicing before coming to see me."