McIlroy: I didn't deserve to win 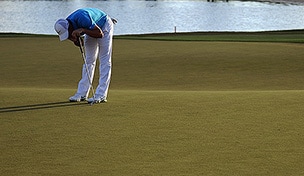 PALM BEACH GARDENS, Fla. – It was nearly dark by the time Rory McIlroy finished his media obligations and marched across the putting green, past the PGA National clubhouse and into the vacant parking lot.

His fiancée, Caroline Wozniacki, kept pace, comforting him with a few soft pats on the back. McIlroy looked skyward, removed his white hat and ran his fingers through his dark curly hair.

Once again, he was frustrated as he left the Honda Classic.

Frustrated by blowing a three-shot lead during the final round.

Frustrated by missing a 12-foot eagle putt on 18 in regulation.

Frustrated by squandering an opportunity to win a PGA Tour event for the first time in 18 months and put his miserable 2013 season to rest.

Video: McIlroy on ups and downs down stretch

Mostly, though, he was frustrated because, he said, “I didn’t play well enough to deserve to win today.”

Staked to a two-shot lead and seeking redemption for last year’s mid-round walk-off, McIlroy slumped to a 4-over 74 and counted himself fortunate to even reach the four-man playoff. His par on the first extra hole wasn’t enough to top Russell Henley, a fellow 24-year-old who earned his second PGA Tour victory.

Confident and in control all week, McIlroy stayed aggressive with his driver but hit only 10 greens Sunday, his fewest all week. In an 11-hole stretch (Nos. 7-17), he lost five shots to par. He finished at 8-under 272.

“It was a perfect opportunity to win,” he said. “No one was really coming at me.”

McIlroy pressed too much when he kicked away the title in Dubai.

This time, he simply didn’t perform when it mattered most.

The Honda was still his to win when he entered the second leg of the Bear Trap. But on the 16th hole, he hit his tee ball into the left fairway bunker and attempted to play a 6-iron shot that would ride the wind and drift left. He didn’t pull it off, catching the shot fat. Splash. He went on to make double bogey and tumbled out of the solo lead.

McIlroy then dropped another shot on the watery 17th, when he tugged his tee shot into the greenside bunker and was unable to convert the 8-foot par putt.

Of course, those blunders were nearly rendered a mere footnote, after his macho 5-wood approach from 236 yards on 18. His shot landed soft and settled 12 feet from the cup, and he pumped both fists, screaming, “Come on!” as the crowd roared its approval. His walk-off bid slid by on the low side.

In the playoff, he tried to play a cut 5-wood from an awkward yardage and flew the ball into the back greenside bunker. The lie wasn’t ideal and neither was his shot, which skidded across the green and into the first cut of rough. His birdie chip came up woefully short.

“I had my chances,” he said. “It’s tough to take at the minute, but I’ll sleep it off tonight and get back at it.”

Indeed, there was little time to dwell on Sunday’s clunker with the WGC-Cadillac Championship at Doral looming this week.

McIlroy has to be considered the favorite, even after this setback, after recording his second runner-up finish in his last three stroke-play events and eighth top 10 since October.

“I haven’t been able to walk through that door,” he said, “but I feel like the more times I knock on that door, I’ll eventually step through it.”