McIlroy leads Henley by one at Honda Classic 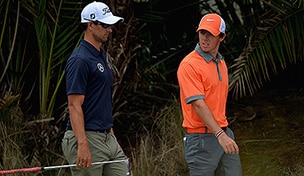 PALM BEACH GARDENS, Fla. – Rory McIlroy shot a bogey-free 63 Thursday to take a one-shot lead at the Honda Classic. Here’s the skinny on Round 1 at PGA National:

What it means: McIlroy, the 2012 champion, shook off an embarrassing walk-off last year and opened with 63 at his second consecutive stroke-play event. He also shot a first-round 63 earlier this month in Dubai, then finished joint ninth. The world No. 8 has finished inside the top 11 in seven of his last eight stroke-play events.

Round of the day: McIlroy made seven birdies, including three in a row to begin the back nine, to surge to the top of the leaderboard. He hit 14 greens and needed only 25 putts. At the end of the first round, he’s top 10 in driving distance, approach shot distance and strokes gained-putting.

Best of the rest: Russell Henley hasn’t made much noise since his victory last year at the Sony Open. In fact, he has just a pair of top 10s (none since June) after that maiden title, ceding the spotlight to fellow up-and-comers Jordan Spieth, Patrick Reed and former Georgia teammate Harris English. But the 24-year-old birdied his first four holes Thursday, going out in 30 and posting a first-round 64 to sit just one shot off the lead.

Biggest disappointment: Hoping to jump-start his 2014 season, Tiger Woods instead needed a final-hole birdie just to salvage an opening 1-over 71 at the Honda. This is his eighth official round of the year, and on Thursday he wasn’t much better than his previous two starts, where he tied for 80th (Torrey Pines) and finished T-41 (Dubai). He wasn’t the only star to false start on Day 1, however. Phil Mickelson made only a pair of birdies during his opening 70, while world No. 3 Henrik Stenson shot 73 to continue his early slump.

Main storyline heading into Day 2: Can McIlroy keep it going on a track where he’s enjoyed some success? When he won in 2012, he shot all four rounds in the 60s and shot 12 under par. He’s already more than halfway there after the opening 63 that was just one shot off the course record. There would be no better way to silence the skeptics than with a decisive victory with the Masters just six weeks away.