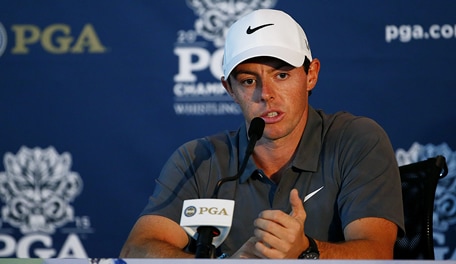 “That was basically my fitness test,” he said.

McIlroy reported no pain, no swelling and no issues with his rehabbed ankle, which he had injured July 4 in a friendly soccer game.

There was some debate within his team that McIlroy could have undergone that “fitness” test at the WGC-Bridgestone Invitational, where he was the defending champion.

“But doing that in front of guys in the media, the eyes of the world, it probably wasn’t a great idea,” he said. “So to do it behind closed doors and to see how it reacted, we thought that was a better idea.

“Once I was able to complete that, then I knew it was the right decision to get on the plane and come here.”

McIlroy played practice rounds here at Whistling Straits last Saturday and Sunday, even jogging up dunes and stairs to show a television audience and fans on-site that his ankle was a non-factor this week.

It’s been a gradual process to reach this point.

With his foot in a boot, McIlroy spent more time on his short game, chipping and putting to keep some feel in his hands. He said he went on one- or two-hour walks two weeks after the injury, when his ankle was still in a brace. And in the gym, under the watchful eye of trainer Steve McGregor (who worked previously for the Manchester City soccer team and New York Knicks), McIlroy shed the support wrap and tried to strengthen his ankle as best he could.

“As injuries go, it could have been worse,” he said. “I was lucky that I didn’t do more damage, and thankfully after five weeks of hard work and rehab I’m back playing.”