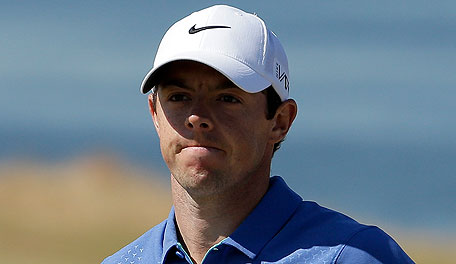 ST. ANDREWS, Scotland – Rory McIlroy is the No. 1-ranked player in the world for at least a few more weeks.

Jordan Spieth had a chance to overtake McIlroy for the top spot in the world rankings, but needed a victory – and only a victory – at the Open Championship. Spieth bogeyed the 71st hole and missed out on the three-man playoff by one shot.

Spieth will likely have a chance to move to world No. 1 for the first time if McIlroy is unable to defend his titles at the WGC-Bridgestone Invitational and PGA Championship because of injury. Spieth would be the second-youngest to rise to that position, behind only Tiger Woods.

Zach Johnson, who won the Open Championship in a playoff, rose from 25th to 12th. Louis Oosthuizen and Marc Leishman, who lost in the three-man playoff, also made positive moves. Oosthuizen went from 17th to 13th; Leishman from 61st to 27th.

Scott Piercy, who won the opposite-field Barbasol Championship on Sunday, went from 112th to 71st.

The top four in the world remained the same after the Open – McIlroy, Spieth, Bubba Watson and Dustin Johnson. Justin Rose moved from eighth to fifth after his T-6 finish.