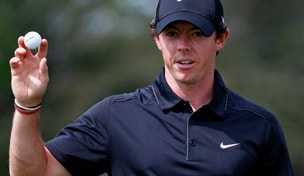 PALM BEACH GARDENS, Fla. – Rory McIlroy maintained his position atop the leaderboard Friday at the Honda Classic after another day of preferred lies and low scores. Here’s the skinny on the second round at PGA National:

What it means: McIlroy followed up his bogey-free 63 with a sterling 66, in which he made six birdies in a 10-hole stretch. This is his first 36-hole lead on the PGA Tour since the 2012 Deutsche Bank. That event also saw him post his best 36-hole score on Tour: 130. He is at 11-under 129 through two rounds here. His 49 putts through 36 holes is also a career-best on Tour.

Round of the day: Brendon de Jonge birdied his first three holes Friday and had only one blemish during his second-round 64. That left him one shot back of McIlroy as he chases his first career victory on Tour. Entering this week, the big Zimbabwean hadn’t finished inside the top 50 in his last three starts, including two missed cuts.

Best of the rest: Russell Knox began the day on the cut line, but he posted a bogey-free 63 to jump inside the top 10. John Senden also erased a poor Day 1 with a second-round 63 to move into contention here. Every player inside the top 17 on the leaderboard shot a round in the 60s on Friday.

Biggest disappointment: Seven of the top 10 players in the world are here this week at the Honda, but only McIlroy, the world No. 8, has really shown up. Tiger Woods is 11 back. Adam Scott has looked rusty at times and is well behind heading into the weekend. Phil Mickelson and Henrik Stenson are headed home. Buzzkill.

Main storyline heading into Saturday: Leading a tournament may be old hat to McIlroy, but he hasn’t done so on the PGA Tour since September 2012. That unique pressure will test the confidence in his new equipment and faith in his swing changes.