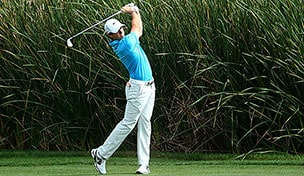 Getty Images
AUGUSTA, GA - APRIL 12: Tiger Woods of the United States walks off the third tee alongside his caddie Joe LaCava during the final round of the 2015 Masters Tournament at Augusta National Golf Club on April 12, 2015 in Augusta, Georgia. (Photo by Jamie Squire/Getty Images)  -

DUBAI, United Arab Emirates – After he was slowed by stomach problems on Friday, Rory McIlroy said Saturday’s 69 at the Dubai Desert Classic was an improvement.

Although he slipped from atop the leaderboard, and will begin Sunday’s final round two shots behind Stephen Gallacher, he figured as long as his health, and his driving, continue to improve he should be fine.

“I’m feeling better, probably not 100 percent, but I'm fine,” he said. “I had a couple of stomach cramps out there but nothing too bad at all. Had a good dinner last night and was eating around the course today, so, no, everything's good.”

As for his driving, McIlroy headed straight to the practice tee to work out the issues with his wayward driver. He hit just 4 of 14 fairways on Day 3 and 12 greens in regulation, his lowest ballstriking totals of the week.

“I feel like my shoulders are probably getting a little bit open, so sort of coming into the ball, upper body is opening up a little bit and leaving a few out to the right,” said McIlroy, who won this event in 2009 for his first European Tour victory. “I’ll go work on the alignment a little bit, and just get a little bit of confidence, get a feeling with it and bring it to the course tomorrow.”