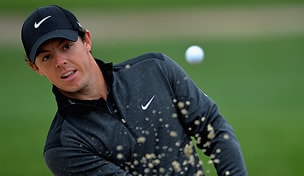 Getty Images
Michelle Wie waits to tee off on the 17th hole Friday, January 16, 2004 at the Sony Open in Hawaii. Wie shot a 68 but missed the cut by a stoke. (Photo by A. Messerschmidt/Getty Images)  -

PALM BEACH GARDENS, Fla. – Rory McIlroy is performing once again like the former world No. 1 who won five times in 2012 and earned Player of the Year honors.

With a 63-66 start at the Honda Classic, the Northern Irishman seems poised to take his first 36-hole lead on the PGA Tour since the 2012 Deutsche Bank Championship. Later that year, he also set the halfway mark at the European Tour’s DP World Tour Championship en route to victory.

When McIlroy won last December at the Australian Open, he trailed Adam Scott by four shots entering the final day and closed with 66.

On Thursday, McIlroy opened his second consecutive stroke-play event with 63. That didn’t lead to victory in his last start, at the Dubai Desert Classic, where he shot 69-74 on the weekend and finished joint ninth.

“I tried too hard,” he said Friday. “Not even just the last day but the weekend, because I had started well in the tournament, I felt like I should have been further ahead and I tried a little bit too hard.”

McIlroy will have to guard against a similar mindset this weekend at PGA National, where he is aiming for his second Honda title in the past three years. When he finished his round, he was three shots clear of the field.