McIlroy: Worked on my game, comfortable with swing 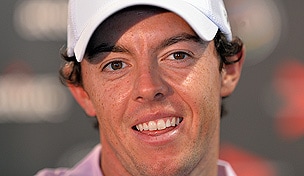 Getty Images
ST ANDREWS, SCOTLAND - SEPTEMBER 30: Nacho Elvira of Spain juggles his club on his foot whilst waiting to play off the 16th tee during the final practice round of the 2015 Alfred Dunhill Links Championship at The Old Course on September 30, 2015 in St Andrews, Scotland. (Photo by Mark Runnacles/Getty Images)  -

MARANA, Ariz. – Last we saw Rory McIlroy he was battling a balky driver on his way to a tie for ninth at the Dubai Desert Classic, which compared to his trying start to the 2013 season was an improvement.

This week at the WGC-Accenture Match Play Championship, McIlroy seems poised to continue that trend when he tees off for Round 1 against Boo Weekley on Wednesday.

“I was a little disappointed about how I played on Sunday in Dubai, but taking the positives from it. It was a good start to the season,” said McIlroy, who tied for ninth in Dubai and finished runner-up at his season opener in Abu Dhabi.

McIlroy said he spent the last two days working on his putting with Dave Stockton Sr., but his bigger concern in Dubai was his driving which seemed to peak on Thursday.

“I’ve worked on my game. I’ve worked hard and I feel like I’m seeing the results,” he said. “I’m comfortable with my swing.”