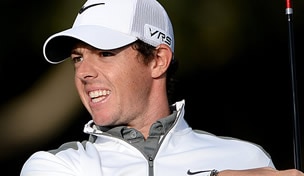 DUBAI, United Arab Emirates – With his tongue firmly planted in his cheek, Rory McIlroy lamented his missed opportunity on Thursday at the Dubai Desert Classic.

“I really wanted to shoot two 62s in one week,” he smiled.

Ultimately, the Ulsterman came up one stroke short on Thursday at the Emirates Golf Club of matching the casual round he had on Monday just down the road at the Els Course. After a brief pause, McIlroy admitted Thursday’s 63 was a little more meaningful.

Playing alongside world No. 1 Tiger Woods, McIlroy scorched the Emirates course with seven birdies and an eagle to take a two-stroke lead at the site of his first European Tour victory in 2009.

McIlroy’s game has been on the rebound the last three months following a difficult 2013. He finished tied for fifth in Dubai late last year at the DP World Tour Championship, won the Australian Open in a shootout with Adam Scott to close the season and began 2014 about an hour east of the Emirates course in Abu Dhabi with a runner-up showing.

On Thursday, the world No. 7 made it look easy, but as he’s learned over the last 12 months perception does not always dovetail with reality.

“I don’t think it’s ever easy,” he said. “Sometimes it’s harder than other times, but I’ve put a lot of hard work in the last few months.”