McIlroy's focus on winning, not being world No. 1 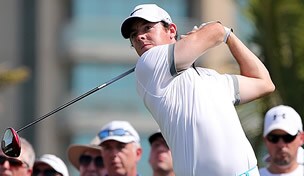 DUBAI, United Arab Emirates – In the year since Rory McIlroy began his season in the Middle East in 2013 he’s drifted from first in the Official World Golf Ranking to No. 6, and following his opening 63 on Thursday at the Dubai Desert Classic he was asked how important it is to reclaim the top spot.

“It’s a byproduct of playing well, giving yourself chances to win tournaments,” he said. “If I finish second in every tournament from now to the end of the year, I would be world No. 1. I won’t be happy. I wouldn’t have won.”

Currently, McIlroy is 4.45 points behind Tiger Woods. Or, to put that lead in context, it’s the same distance that separates McIlroy from the 69th-ranked player, Bo Van Pelt.

Just don’t try to tell the Ulsterman that being sixth in the world is anything to be concerned about.

“Yeah, sixth is so bad. Only five players in the world ahead of me,” he laughed. “When you’re used to being up there it’s more of an ego boost than anything else. You see yourself up there and you feel good about yourself but it doesn’t matter.”