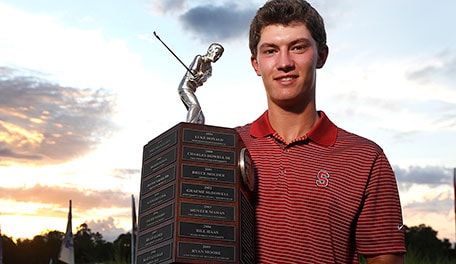 The first five players were named to the 10-man U.S. Walker Cup team on Monday, with no surprises.

The team, captained by Spider Miller, will be finalized after next week’s U.S. Amateur at Olympia Fields.

The USGA once again has stipulated that at least two mid-amateurs (age 25 or older) must make the team. The frontrunners for those spots are Nathan Smith and Todd White – who teamed to win the U.S. Amateur Four-Ball – and Scott Harvey.

The mid-am rule makes a tight competition even more difficult, with several of the top collegians either delaying their decision to turn pro or tailoring their summer schedule to try and make the squad.

The favorites for two of the remaining spots are Alabama junior Robby Shelton, who finished third at the PGA Tour’s Barbasol Championship, and Oklahoma State senior Jordan Niebrugge, a 2013 Walker Cupper who was sixth at the British Open.

The final non-mid-am spot is completely up for grabs. Among the many vying for that berth: Denny McCarthy, the 2014 U.S. Amateur semifinalist who recently won the Porter Cup; Texas’ Scottie Scheffler, the 2014-15 NCAA Freshman of the Year; and Oregon sophomore Aaron Wise, who won the Pacific Coast Amateur and lost in the Western Amateur finals in back-to-back weeks.

The U.S. leads the overall series, 35-8-1, including a 17-9 victory two years ago at National Golf Links of America.