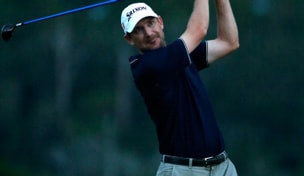 Getty Images
NAPLES, FL - NOVEMBER 23: Pornanong Phatlum of Thailand and her caddie wait to play a shot on the 17th hole during the third round of the CME Group Titleholders at Tiburon Golf Club on November 23, 2013 in Naples, Florida. (Photo by Sam Greenwood/Getty Images)
-

ST. SIMONS ISLAND, GA. – After winds whipped across the Seaside Course early in the week, George McNeill found the relatively benign conditions Thursday afternoon at the McGladrey Classic to be a rather welcome sight.

“It’s night and day. Not even comparable,” explained McNeill, who was atop the leaderboard and 8 under through 16 holes when play was suspended Thursday due to darkness. “On Tuesday it was blowing 25-30 (miles per hour). Today it was blowing 1-3.”

Twice a winner on the PGA Tour, McNeill was buoyed by a stretch in the middle of his round that included five straight birdies. Admittedly puzzled by the poa annua greens seen at many of the Tour’s California events in January and February, the 38-year-old is embracing the setup of the Tour’s new wraparound schedule.

“I’ve never really played well on the West Coast to start the year,” explained McNeill, who tied for seventh last month at the Frys.com Open to begin his 2013-14 season. “If I can play well to start the year with these fall events, it will give me a little jump start to having a decent year.”

Beginning his round on the 10th hole, McNeill reached 7 under on the par-70 layout after leaving the fourth green with a birdie, his seventh of the day. Though he briefly considered the requirements for a run at golf’s magic number, he quickly forced himself to refocus on the task at hand.

“I was just running through the remaining holes,” he explained when asked if he considered thoughts of shooting a 59. “Then I had about a four-footer for par and I’m going, ‘Wow, I need to quit thinking about this stuff.’”