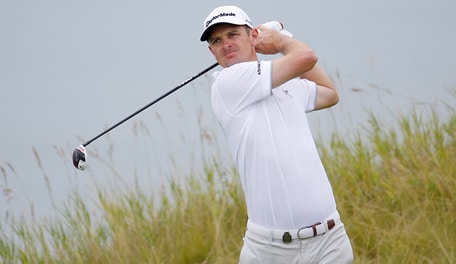 SHEBOYGAN, Wis. – On a listless morning, Justin Rose got off to a woeful start in the 97th PGA Championship. The trouble began at the par-5 11th, his second hole of the day, when he found himself in a greenside bunker.

“It was just the most awful rake job I have ever seen in my life,” Rose said. “Actually couldn’t even get it out of the bunker. Left it in there and got up and down for a bogey.”

Following a “weak bogey” at the par-4 13th, Rose was 2 over through four relatively easy holes. But memories of the start to his 2013 U.S. Open victory offered inspiration.

“I just reminded myself that I was 4 over through [13 holes in the first round] when I won at Merion and bounced back from that,” Rose said.

Rose birdied three of his final four holes that day. On this one, he played his final 14 holes in 5 under for a 3-under 69.

“That's the perfect start, really. I think obviously when you go and shoot 7 or 8, 9 under par in a major in the first round, it's a lot of pressure to absorb for the rest of the week, because you're in contention,” Rose said. “And I feel like that was a great start for me after being 2 over and it's a platform on which I can build now for the rest of the week.

“You can never win it on Thursday; you can only lose it. That's obviously a good job done today.”