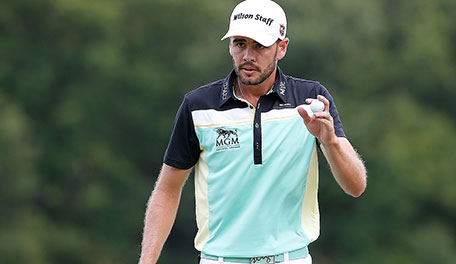 Troy Merritt won his first PGA Tour title Sunday with a 4-under 67 at the Quicken Loans National. Here's the lowdown from the final round at Robert Trent Jones Golf Club:

What it means: Merritt started the weekend T-35 after opening with rounds of 70 and 68, but he grabbed a share of the lead with a third-round 61. He began Sunday with three birdies on the front nine, and then shut the door closed by nearly holing out at the par-3 16th. Merritt now enjoys all the fruits of winning his first title. He gets into next week's WGC-Bridgestone Invitational and the PGA Championship. He's exempt through the 2016-17 season, and he's into next year's Hyundai Tournament of Champions, the Masters and the Players. Merritt was also No. 123 in the FedEx Cup rankings coming into this week, and now he's ranked 38th and moves on easily into the upcoming playoffs.

Round of the day: Carlos Ortiz made a double bogey and still shot the low round of the day, a 5-under 66. Ortiz blitzed holes 5-8 with an eagle and three birdies. After his double on 14, he closed out in style with birdies on 17 and 18.

Best of the rest: Justin Thomas fired a 4-under 67 to record his second top-10 finish in a row and seventh this season.

Biggest disappointment: Kevin Chappell started the day tied with Merritt and was also looking for his first PGA Tour title. But he came unglued on the back nine with two double bogeys and two bogeys for a 6-over 77 and a T-18 finish.

Shot of the day: Tiger Woods drove into the pond right of the fairway at the par-4 12th, but he hit a Seve-esque recovery shot, cutting a fairway wood from the rough, around the trees and on the green.

Quote of the day: "It was kind of a mixed bag as far as the results, but the fact I had total control of the golf ball was nice." – Woods after a 3-under 68