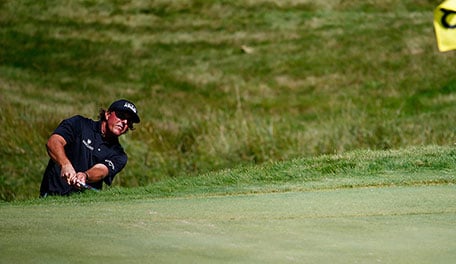 SHEBOYGAN, Wis. – Phil Mickelson wants to earn his way onto the American Presidents Cup team, and he’s hoping Saturday’s 6-under-par 66 at the PGA Championship is a sign he still has time.

“I want to get on the team on my own merit, but I haven’t played well enough to do it,” Mickelson said.

Mickelson made nine birdies around Whistling Straits Saturday with three bogeys. He moved to 5 under overall.

If not for mistakes with some easy shots, including three three-putts, Mickelson said he might have made some history.

“It could have been in the low 60s and possibly broken the major record,” Mickelson said. “That would have been special, but you just can’t make those kind of mistakes.”

Mickelson’s last title came two years ago at the British Open. He has three top-10 finishes this year, including a second-place finish at the Masters.

Still, Mickelson sees signs his game is coming together.

“It's been two years since I've been at my best, and it's a little disappointing that it's taken so long,” Mickelson said. “But I'm trying to be patient and rounds like these help because I see how close I am to finally being at my best.”