Mickelson (74) heads to PGA in search of his game 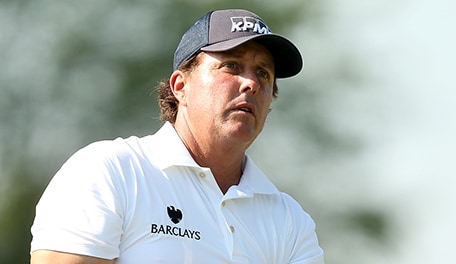 AKRON, Ohio – Last year Phil Mickelson used a final-round 62 at the WGC-Bridgestone Invitational as the catalyst that sparked a run up the leaderboard at the PGA Championship the following week.

He built no such momentum this time around in Akron.

Mickelson shot a 4-over 74 in the final round, completing the event at 11 over and leaving the course Sunday well before the leaders teed off. This marked just the second time, and first since 2007, that Lefty failed to break par in any round at Firestone Country Club.

Mickelson declined to speak to a handful of media members following his final round.

Mickelson was teeing it up this week for the first time since a T-20 finish at the Open Championship, but he got off to a rocky start with a triple bogey on No. 3 Thursday and played his first seven holes of the tournament 5 over.

After recording 10 birdies during last year’s final round alone, Mickelson made only eight birdies over 72 holes this week. He found 41 percent of the fairways and 49 percent of the greens in regulation.

Mickelson will now head to the season’s final major, on the 10-year anniversary of his PGA title at Baltusrol, in search of his game. The 45-year-old has yet to win since the 2013 Open Championship, but his record at Whistling Straits includes a T-6 finish in 2004 and a T-12 finish in 2010.