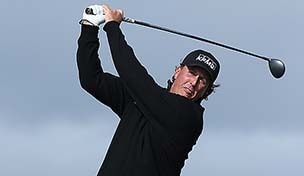 Getty Images
CHARLOTTE, NC - MAY 17: Webb Simpson walks off the 18th hole during the final round at the Wells Fargo Championship at Quail Hollow Club on May 17, 2015 in Charlotte, North Carolina. (Photo by Jeff Gross/Getty Images)  -

PEBBLE BEACH, Calif. – Phil Mickelson, whose Day 1 tee time at the AT&T Pebble Beach National Pro-Am was delayed nearly three hours by torrential rain, was at 5 under through 15 holes when darkness halted play.

Mickelson birdied his first hole, the 10th at Monterey Peninsula Country Club, and the 16th to turn in 2 under, and ended his day with an eagle at the par-5 sixth hole before play was suspended. He was three strokes out of the lead held by PGA Tour rookie Andrew Loupe, who also played Monterey Peninsula.

Lefty will restart his round at 7:45 a.m. (PT) on Friday before heading over to Pebble Beach to begin his second round at 10:06 a.m.

A four-time winner at Pebble Beach, Mickelson – who played his practice round on Wednesday at nearby Cypress Point – had been slowed by an ailing back in recent weeks but appeared unhindered on Thursday.