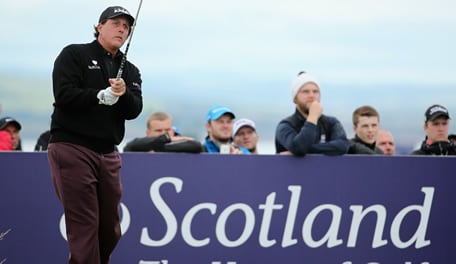 Phil Mickelson overcame a slow start for the second straight day at the Scottish Open, and he earned himself a weekend tee time in the process.

Mickelson flirted with the cut line for much of his second round at Gullane Golf Club, but after a late string of birdies he moved well into red figures in his final tune-up before the Open Championship.

After an opening-round 69, Mickelson birdied his second hole. But after back-to-back bogeys on Nos. 11 and 12, the he found himself on the wrong side of the projected cut line, which will trim the field to the top 65 players plus ties. A short birdie miss on No. 13 didn't help matters, but Mickelson turned it around with three straight birdies on Nos. 14-16.

It added up to a 2-under 68 in the second round, and at 3 under Mickelson trailed a group of co-leaders by five shots with the afternoon wave still to complete play at Gullane. (Note: Mickelson finished eight back of 36-hole leader Daniel Brooks)

Mickelson's ball-striking improved Friday, as he found 14 of 18 greens in regulation, but he needed 30 putts to complete his round. Mickelson has hit nine fairways in each of his first two rounds and has gotten up and down seven times out of 11 opportunities.

Mickelson captured the Scottish Open at Castle Stuart in 2013 before hoisting the claret jug at Muirfield the following week, the only player to pull off such a double. He is making his first worldwide start since a T-64 finish at the U.S. Open last month.