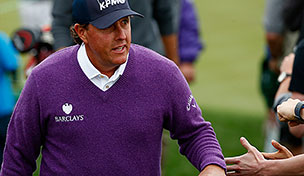 SCOTTSDALE, Ariz. – Phil Mickelson followed his lackluster even-par 71 in the first round of the Waste Management Phoenix Open with a 4-under 67 Friday.

Through two rounds, he sits eight shots back of co-leaders Bubba Watson and Matt Jones.

“A 4-under-par round, I kind of needed a little bit more,” Mickelson said, “but I’m still in a position where if I can get out tomorrow, I will be one of the first groups off, I can get a hot round with some fresh greens and see if I can make a move for tomorrow’s round and get in a position for Sunday.”

Mickelson is trying to defend his WMPO title, and is trying to do so after having withdrawn from last week’s Farmers Insurance Open because of back pain. Mickelson maintained, as he revealed Thursday, that his back is not an issue.

“My back feels great. … I feel terrific and I just want to be a little cautious for the next week or two, and then I should be fine.”

Making up the eight-shot deficit might be hard for most, but it was just one year ago when Mickelson posted a 59 and ½ (OK, 60) when he lipped out his putt for 59 on the 18th green in Round 1.

“If I can shoot mid-60s, 5 or 6 under, I should be able to be within striking distance with a really low round on Sunday.”